Valentin Ruhry is a “sculptor in the traditional sense, working with untraditional materials”. Those materials have often been industrial in nature; in Untitled (wave), he uses naked fluorescent tubes to create a gentle wave of light that feels like it is about to push forward and fill the room. 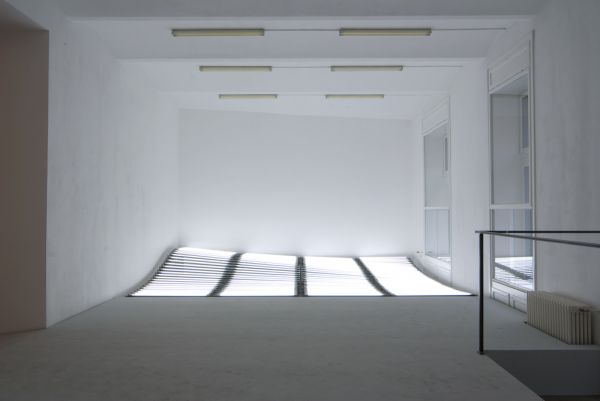 Ruhry spent the summer teaching at the San Francisco Art Institute. His class, titled the Invisible Institute, prompted “students to question how their practice may function outside of the traditional studio or white cube, by encouraging the use of alternative materials and art processes.” Ruhry happened to be living in Hayes Valley and often passed by and through PROXY. A chance introduction to a PROXY staffer led to Transient Havens, the upcoming exhibition of Ruhry’s students’ works at PROXY on Friday, August 1st from 5pm-8pm.

A full description of the exhibition is below. Taking place within a fenced provisional placeholder for a future permanent building, the one-day art exhibition Transient Havens prompts viewers to consider the potentials for urban and social impermanence in the heart of Hayes Valley. For this exhibition, the featured artworks by Noah Brill, Carl Martin, Valentin Ruhry, Christian Valla, Nancy Winkelmann, and an anonymous artist take shelter in this transient haven privately managed by the design firm envelope A+D, yet overtly visible from the street. Together, the featured temporary art installations redefine perhaps fixed distinctions between private and public space in this hip neighborhood of small and portable “pop-up” style retail pods such as Proxy, among other fancy restaurants, and fashion trendy shops. Each taken individually, the artworks make visible common, yet distinct, concealed aspects of private life, and challenge different notions of invisibility, accessibility, and common understandings of territoriality.

From the cavern of a closed metal container, Noah Brill’s sound installation shouts inner thoughts about the daily surroundings aloud. Similar to the “thought bubbles” in comics, allowing readers to enter characters’ inner and secret opinions, Brill’s piece invites viewers to put in perspective the shifting private/public status of the area.

Christian Valla’s Neophytes is a video installation about loss of territory, roots and identity. The installation echoes the heritage of the Native American people of the Ohlone tribe, who lived in dome-shaped huts for thousands of years, until Spanish conquistadors burnt down their villages, forced the tribe to take Spanish sir names and convert to Christianity. By building a domelike, temporary structure as a display for the video, this heritage is connected to the present day where families are forced to evict their homes in San Francisco due to extreme living costs. Neophytes is a moment of reflection on the cultural consequences of these movements.

Wood-burning disturbed quotes from the story books that were read to us by our elders into the wooden rungs of a rope ladder, Nancy Winkelmann’s work takes on the concept of escaping to a refuge by climbing through the harsh realities of life. The steps lead upwards to the idea of a safe haven found within the tree houses of our childhood, but also exists within each of us in adulthood.

Carl Martin’s Heavy Reader installation features a familiar floor perforated by a series of books after violently falling from the sky, altogether telling the story of a man, and inviting the viewers in his surreal home.

For his work Territory, Valentin Ruhry installed an ensemble of flags along the space’s fence, made out of found camping fabrics that he sewed together, suggesting notions of territoriality, property, and frontiers linked to this enclosed exhibition space.

Finally, a contribution by an anonymous artist, pre-existing to the exhibition, reminds of the area’s temporality and daily use.

What was previously the path of the former San Francisco Central Freeway, is today, on August 1st, the site for transient havens created by each of these installations. As remnants of past, present, and future urban fabric of the neighborhood, each invites viewers to pause and rethink about the local urban issues in Hayes Valley, San Francisco, and the Bay Area at large, leaving in turn an imprint in the visitors’ minds.

This temporary exhibition is organized by members of The Invisible Institute, a class of SFAI‘s public education program.